The Gift of My Brother 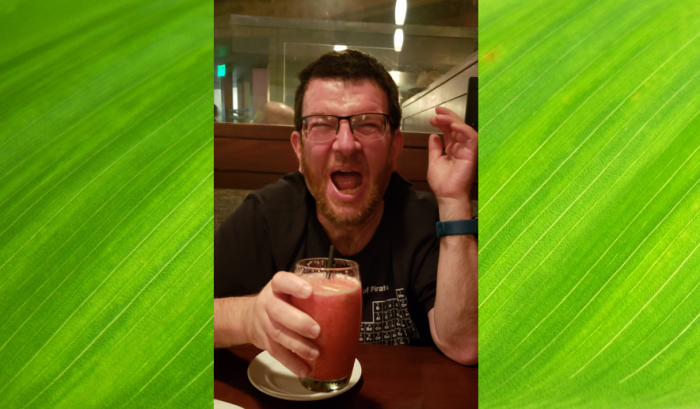 Yoav cracking himself up telling a pun on his 52nd birthday

As we continue our month-long celebration of Autism Awareness and Inclusion, we are excited to feature the powerful perspective of a loving sibling and their families journey with autism.  This piece is a potent reminder of special sibling relationships, the power of inclusion in the community and the brightness individuals with ASD such as Yoav bring to our world.

My 52-year old brother, Yoav, is on the middle of the Autism Spectrum. His official diagnosis is Pervasive Developmental Disorder – Not Otherwise Specified (PDD-NOS). A rather obscure term for a somewhat confusing developmental identity. Yoav is borderline savant, fluent in five languages, with a passion for picking up new ones by looking up words in different languages online. He is a walking encyclopedia of movies, directors, actors spouting their ages, credits and marital status going back from the 1930s black and white era and into the present. He collects t-shirts with puns that crack him up every single time he quotes them, and he makes up his own on a daily basis. He is also impossibly literal, sensitive as a newly calibrated seismograph, unable to grasp the concepts of time or money, and often as slow of speech and action as a red light when one is in a hurry. On any given day, he may present behaviorally as 52, 12 or 5.

Yoav has always been an obstacle to be circumvented, an inconvenient detour, slowing people down. He makes people uncomfortable. His larger-than-life moods that manifest in uproarious, infectious belly laughter and disproportionate, at times unprovoked fits of anger that can take half a day to process through and defuse. The way he loves with the wide-eyed innocence of a child believing in perfect humans. How he hurts from the depth of pain or anger that is made cataclysmic because of his inability to discern proportion or context and regulate accordingly.

Were it not for my mother who fought for his placement in mainstream organizations long before Autism Spectrum Disorder was either defined or understood, Yoav would have been relegated strictly to marginalized and often stigmatizing institutions. He has always been high functioning enough to be presentable in any setting, yet odd and slow enough to generally be tolerated at best. Growing up in Israel, no one would have ever thought of inviting our family anywhere without including my brother, and yet rarely, did anyone bother to engage with him. He would wander about people’s houses, randomly drawing out books from shelves and looking at their titles, gravitating toward the TV if there were one anywhere that was on, seemingly content to while away his time in solitude amongst others. Socially conscious friends and family would engage him with the same perfunctory questions, variations of meaningless small talk, only partially listening to his slow, verbose responses while their eyes darted about the room, disbursing their actual attention to more comfortable and interesting interactions. I’ve always been grateful that my brother, as self-involved and oblivious as a five-year-old at times, seemed blissfully unaware of his own marginalization.

Today, Yoav lives with my wife and I and volunteers at Seattle Jewish Community School where I work, an independent K-5 school dedicating to living the value of community in its name. He tutors some students in Hebrew; he opens the mail and vigorously stamps it with the date received; he pulls the weeds from the cracks in the pavement outside; and plunges the toilets when they clog. He stops and stares at people for no reason. He asks parents how their spouses or other children are every single time he sees them. He repeats the same joke to staff members for the umpteenth time. And yet, unlike almost any setting he has been in previously – people see Yoav here. They look at him. Acknowledge him. Engage him. My colleagues, our families make a point to seek him out, thank him for a job well done, ask him a question and listen for his answers. He is truly, included. John Donne’s words, “No man is an island entire of itself,” remain as true today as ever.  Sometimes genuine, unpatronizing human connection is all any of us needs to have purpose and be happy. Go ahead, offer that connection.