Not Far From the Tree? 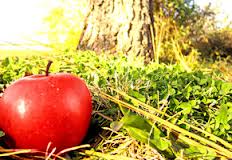 Kids with Autism and Their Parents

I recall a provider telling me, years ago, that kids with autism have parents who have traits of the disorder themselves. I didn’t question him but I did take offense at that statement. This was back when I was still wrestling with worries that I somehow contributed to or caused it for her.

I also recall at her initial evaluation, as we were asked about our own developmental and family history, telling Dr. Cowan that I had been a painfully-shy, worry-wart child/teen/young adult. At annual conferences, my parents were told that I was a good student but I wouldn’t come out of my shell. I couldn’t decide if Sister Gregory thought I was a turtle or a nut and my mom couldn’t reconcile that at home I wouldn’t shut up but at school I barely spoke a word.

No one on either side of our families had been diagnosed with autism though. We both acknowledged a late talker here, a touch of OCD there, and other worriers between our families. But did that all add up to autism in our daughter, we wondered? Did she have the unfortunate fate of inheriting from various family members, all our social-communication and behavioral glitches?

I sometimes hear parents of kids with autism spectrum disorder (ASD) say that they think their spouse is “on the spectrum”. It made me wonder what research has been done in this area. To learn more, I went to Jennifer Gerdts, Clinical Psychologist at the Seattle Children’s Autism Center and Assistant Professor in the Department of Psychiatry and Behavioral Sciences at UW. Here’s what Dr. Gerdts had to share:

Lynn: Dr. Gerdts, what can you tell us regarding parents/siblings of children with autism having some non-clinical features of ASD?

Now, that means that approximately 70% do not show these differences! But the rates of these traits are definitely elevated compared to other groups. And we tend to see these traits more often in males. And these ASD-related traits happen more often in families who have multiple children with diagnoses of ASD compared to those who have just one child with ASD.

In the scientific community, this general phenomenon is called the “broader autism phenotype.”

Lynn: What about the belief that parents of children with ASD (may) have a psychiatric diagnosis themselves?

Dr. Gerdts: Studies have found an increased rate of psychiatric diagnoses in parents, most commonly anxiety and depression, that actually seem to occur before having children (although I would be willing to bet that many parents struggle with worries and sadness after receiving a diagnosis of ASD in their child when these feelings were not present beforehand).

Lynn: Do scientists and diagnostic/treatment providers see many cases where a child with ASD has a parent also diagnosed with ASD?

Dr. Gerdts: I don’t know the exact percentage of parents who actually have received a diagnosis of ASD themselves, but I imagine that it is very small given that receiving a diagnosis 30+ years ago in a likely high-functioning individual would have been quite rare and not too many adults seek out an evaluation for themselves to confirm a diagnosis (although this is definitely not unheard of).

Lynn: Do scientists believe that kids with autism who have siblings or parents with some features (anxiety, ADD, OCB-tendencies, late talkers) got a full genetic hit of all of those things while other family members got just one or two to a lesser degree?

Dr. Gerdts: There are a number of theories that exist that attempt to explain the presence of broader autism phenotype traits in family members from a genetic perspective, but none are generally agreed upon. As you elude to, yes, some scientists believe that certain features are inherited from one parent and others from the other parent and according to that perspective it’s the combination of these traits that results in autism.

Other scientists believe that it is the number or type of problematic genetic events present that could potentially explain the broader autism phenotype versus a full diagnosis. That is, according to this theory if one child in the family has autism and a sibling only has some related traits we might imagine the sibling has only one gene-disrupting mutation while the child with autism has “multiple events.” Multiple events mean that the child has more than one problematic gene mutation. Unfortunately, we don’t understand enough at this point to give a firm answer.

Lynn: Do scientists believe that it is an environmental trigger that is the difference between one family member getting the “full load” or is it genetic – or both?

Dr. Gerdts: At this point, the answer to this question is generally considered to be “both”. That is true for autism itself as well— there is a strong genetic component but clearly there is also some interaction with (generally unknown) environmental factors that occurs to cause ASD. Unfortunately, we don’t know the answer in most cases and the same is true for why the broader phenotype appears in some families and family members but not others.

Lynn: Do you have any research studies to share for those who want to learn more?

Dr. Gerdts: Here’s a link to a paper Dr. Bernier and I wrote about the broader autism phenotype a few years ago. http://www.hindawi.com/journals/aurt/2011/545901/ It was published in 2011, but a lot of the take-home points are the same.

We’d like to thank Dr. Gerdts for sharing with us what researchers know about the broader autism phenotype.