Mike Bikes for Autism: A Father’s Inspiring Cycling Trek Across the Country, Raising Autism Awareness and Funds One Mile at a Time Mike Tapogna is a father to a 9 year old with autism spectrum disorder, Luca. He is also an avid cyclist, a courageous father, and an inspiring advocate.  In a thoughtful attempt to honor his love for his son, and raise awareness and support for individuals and families touched by autism spectrum disorders, Mike decided to head out on an amazing journey across the country, cycling from Seattle to New York City, raising awareness and funds for autism one mile, one town at a time.

Mike’s fearless trek across the country is not about a destination, rather entirely about the journey, a journey for him and his family that started with Luca, and an autism diagnosis. Some may say this journey is similar to raising a child on the autism spectrum; there are bumpy patches, confusing twists and turns, and also beautiful wide open roads, full of opportunity and wonder. 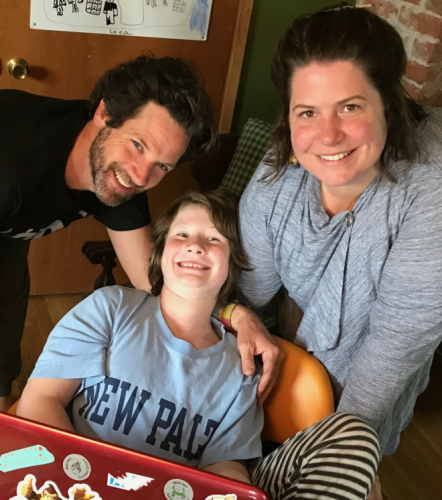 “My son will be ten at the end of May. He will be heading into double digits having made huge strides forward, at home and at school…. We have worked with an ABA therapist on many things, tackling them one at a time, following directions, accepting no, etc.”

On his journey, Mike has been blogging daily, sharing his reflections on being a dad to Luca, the kindness of people he has met along the way and how the ‘village’ around us keeps you moving forward in life, especially when things get tough. On his fundraising page, Mike reflects on the way in which autism is a part of their daily lives, and how much work and dedication it takes, while also acknowledging the pure joy and love his son brings to their world, “he is the most amazing person I know and the love of my life”.

The undying love of this father for his son has captivated all of his followers, and his dignified and unassuming approach to this courageous effort has won many fans along the way.   To date, Mike is half way across the country, and has raised an outstanding $11,300 for the Seattle Children’s Autism Center.

Mike’s son Luca received his diagnosis at the Seattle Children’s Autism Center, which is why Mike chose to have the proceeds from this amazing trek across the country benefit the Autism Center.

All of us at the Autism Center are rooting Mike on from afar, touched by his generous spirit, his undying devotion to his son, and his thoughtful approach to raising awareness across the country on two wheels.

To cheer Mike along and make a donation to the Autism Center in honor of Mike’s journey, visit his personal fundraising page here.

One Comment on “Mike Bikes for Autism: A Father’s Inspiring Cycling Trek Across the Country, Raising Autism Awareness and Funds One Mile at a Time”