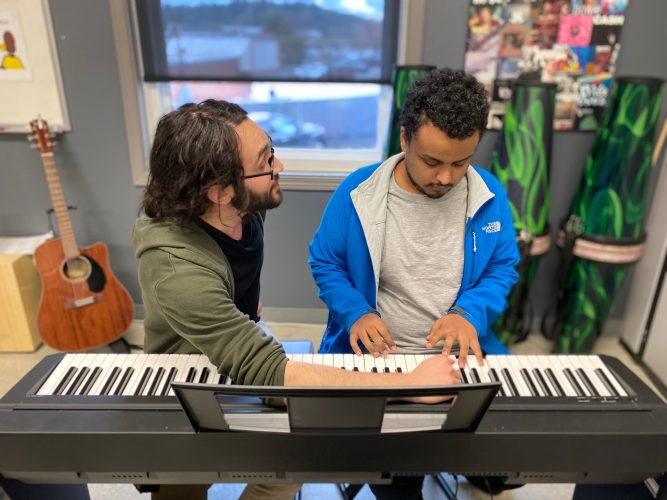 In our dominant culture, music is for the gifted and talented. A person must be thoroughly skilled in an art for them to be taken seriously and celebrated. TV shows like American Idol entertain viewers with failed auditions and celebrate a chosen few. In our culture, only the most skilled and able are rewarded for doing music.
Can anyone make music? Does a person have to be skilled to do music? Do you have to use your voice to participate in music? At the Alyssa Burnett Center, a lifelong learning center for adults with autism and developmental disabilities, music is for anyone and everyone.

Music class starts off with a hello song. One of our students, Nick, carries around an Ernie doll from Sesame Street. Nick also likes Newman from Seinfeld. So when we say hi to Nick, sometimes we’ll say hi to Newman to bring a smile to his face. Jim is a student in the same class who has an extraordinary memory. The week after learning Nick liked Newman, once we said hi to Nick, Jim instantly started singing “Hello to Nick, Ernie, and Newman! How are you today?” This brought a smile to Nick’s face. Music is social.

One of the most significant and overlooked aspects of being human is the ability to make choices. When students engage in activities in a way I don’t understand, or isn’t how music is typically done, that is a moment for me to understand and learn. Music at the ABC is an opportunity to let behavior and sounds speak what words may not be able to clearly express.

On the outside looking in, Vincent looks like he’s in his own world, focused on his thoughts, murmuring about N64 games or Disneyland. When asked to play his favorite song on the iPad he immediately asks, “Can I type it?” He then finds a gentle ballad from The Land Before Time soundtrack, something I wouldn’t have guessed as a song Vincent likes. Music can often surprise us. I don’t know exactly what goes on in Vincent’s mind, but I know Vincent connects with this song. This helps me understand him better. Music is emotional.

We all connect to music differently. Some of us sing along, some of us have special songs for particular moments or listen to certain things to get us feeling a certain way. Music is mysterious like this. We all have our “jams” that we can’t get enough of.

One day we played “Three Little Birds” by Bob Marley for the warm-up song. Instantly, Daniel lit up and sang along with reckless abandon, “Don’t worry bout a thing ‘cause every little thing is gonna be alright”. Once the song was over, I handed out hand-bells, drums, and shakers so we all could jam out. Daniel’s joy became a collective joy that we could all share at that moment. Music is fun.

Jacob is a pretty mellow student at the center. During music class when asked how he’s feeling he usually responds tired. Every time a Beatles song plays, Jacob will stand up, clap, and sing out. Jacob isn’t very verbal but when there is a song he knows, he has a powerful voice. Music is familiar.
Karaoke is one of my favorite activities in music class because we get to see some students really let loose when they take the stage. Faith is a student with a lot of personality. During Faith’s first couple weeks, we did Karaoke and she sang “Let it Go” from Frozen. It is always special to see students open up for the first time and really begin to engage in classes. This was Faith’s moment. We pulled the movie clip up from YouTube, played it on the T.V. and she not only sang the song, but she did all the choreography with it too. Music is expressive.

Another one of our students is Jaime and he loves fashion. One day he was dressed up in rock star attire, complete with a cool leather jacket, top hat, and guitar. Wesley was a new student at the center and during class it was made known that they both liked the band KISS. During Karaoke they sang a duet of “I Wanna Rock and Roll All Night” by KISS. Music brings people together.

When I first came to the ABC, I had no experience working with people who have autism or other developmental disabilities. The ABC has shown me my own misperceptions about what makes something “good”. Is it how in tune, in time, or aesthetically pleasing the quality is? Thinking about what makes something “good” or “bad” in certain subjective arenas like the arts can be useful, however, sometimes that binary thinking has potential to be exclusive. The ABC is a place where simply being present is enough. Music is for anyone and everyone.

Music is often called a universal language. In my perspective, this view has limitations. There are many different “languages” of music that I may not understand because I have yet to understand the culture that made it. Indigenous music from each continent and region sound vastly different from each other, and this barely scrapes the surface of genres across the world. To reduce all these expressions of music as “universal” detracts from the beauty present in each.

I like to think of music as a metaphor for our universal humanity. Music reflects what it means to be human. When all the diverse pieces come together in all their unique sound, rhythm, and style, you have a song. This truth expresses itself everywhere. Music is all around us anytime many parts work together to make something beautiful, like our bodies, our homes, our cities, or our communities. In the subtlest ways, music moves us because it reminds us that we need each other. Music reveals our deepest yearnings to be at peace with each other, living together in harmony. I am proud to be a part of the magic happening at the ABC, where this idea of music is a daily reality. 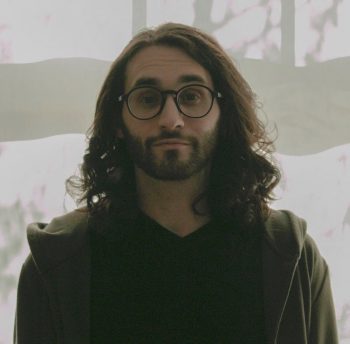 Alex is a Classroom Assistant at the ABC. His primary role is assisting both instructors and students, ensuring students are getting the most out of their experience at the ABC. When he is not working, he is usually enjoying music, drinking coffee, going on a walk, or sometimes all three of those at once!