Children with Autism and Blood Draws 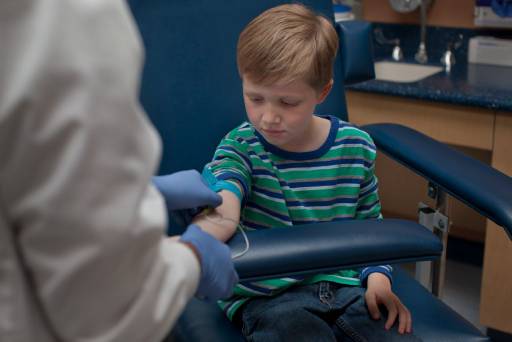 The last part in our series on common challenges parents face in getting certain necessary things done with their kids. Today we share an interview with Jason Russo, RN from Seattle Children’s Autism Center about blood draws and our kids.

theautismblog: What are the most common reasons kids with autism spectrum disorder (ASD) need to have a blood draw?

Jason Russo, RN: Blood draws are typically for standard health assessment such as Vitamin D level, CBC (complete blood count), and sometimes ferritin (iron) level, as well as for kids who are on certain medications that require a regular check of the level of medicine in the body. Blood draws may also be indicated for genetic testing such as for Fragile X and other genetic conditions that may be associated with autism.

theautismblog: Where do parents take their kids to have this done?

JR: Some PCP (Primary Care Physician) offices have their own lab and some use local independent labs for blood draws. For our patients at Seattle Children’s (SC) Autism Center, parents may choose to use our lab at the main hospital campus or one closer to home.

theautismblog: What type of provider does a blood draw?

JR:  In some health care settings, it may be a nurse but more likely, it is a phlebotomist, a provider with specialized training in drawing blood. Our lab at SC is staffed by phlebotomists.

theautismblog: What training, if any, do they have in working with kids who have autism?

JR: It’s likely that most phlebotomists whose lab serves children will have had some experience with kids with autism. I’m unaware of any specific training for autism, but they are trained in working with children and also with helping people to do something that is not easy to do.

theautismblog: Talk us through the procedure. What are the steps from start to finish?

JR: This will vary from lab to lab so I’ll tell you what is involved at our lab at Seattle Children’s. Upon arrival, the family needs to check-in at the greeter’s desk and then again at the lab. There is often a wait before being taken back to the phlebotomy room where the child’s ID will be verified.

As far as the actual blood draw goes, the phlebotomist will look at and feel both arms for a good vein. A large rubber band called a tourniquet is then wrapped on the upper arm to help the vein be more visible. An alcohol wipe or cotton ball is swiped on the arm and then a small, thin needle is quickly inserted into the arm. When the tube or tubes are filled, the needle is gently removed. A cotton ball is placed at the site with gentle pressure and then a bandage is typically placed on the arm.

theautismblog: How much blood is typically needed? Does the reason for the draw dictate how much is needed?

JR: It does depend on what is being tested. If many tests have been ordered, it may require more blood be drawn. One tube/vial of blood is about 2-3 teaspoons. Some tests require that something first be added to the tube so it may look like a lot of blood but it can be a mixture of liquids.

theautismblog: Is there a choice of whether it is a finger-prick or arm that is drawn from?

JR: Sometimes.  It may depend on how much blood is needed and how easily the child will handle it. In some cases, a finger-prick may be less invasive but in other cases, it may not. If you are unsure, ask your provider at the lab ahead of time.

theautismblog: What are some of the most challenging issues that you’ve seen with blood draws and kids with ASD?

JR: Many kids with ASD have trouble understanding and anticipating things that are new to them and a blood draw isn’t easy to explain. Most of us don’t like needles! While a social story works for many new experiences, it may not for a blood draw. Many adults choose not to look at the needle themselves so showing a child pictures ahead of time could backfire. Kids often startle and react physically, which can result in the phlebotomist unintentionally being kicked or hit or the needle being pulled out before the draw is complete.

theautismblog: Tell us about the blood draw clinic that you piloted and plans for a clinic at SC Autism Center.

JR: It began when the staff at our SC lab asked for help from SC Autism Center in making blood draws easier for kids on the spectrum. They were seeing a growing number of our kids and experienced the challenges. We met several times and developed a pilot program that proved to be overwhelmingly successful.

Providers at SC Autism Center were asked to identify patients who were in need of a blood draw. Parents were contacted to see if they were interested in participating. Parents who did, were contacted ahead of the scheduled Saturday asked detailed questions about the child’s experience with past blood draws or if this was the first time, what the parent thought might help make it easier. In some cases, it was planning on bringing a favorite toy or device such as an iPad to distract the child. For others it was planning for a reward after the draw was complete. Some parents asked if pictures of the child’s favorite character (Thomas the Train or Buzz Light Year) could be on the wall. Parents were informed ahead of time what the procedure entailed and also given a chance to share whatever they felt was important about their child. Each child was scheduled an appointment time.

One significant challenge that was eliminated was the wait. Staff had already checked the child into the system when they arrived at the greeter’s desk and there was no second wait at the lab. Parent and child went immediately to the room and everyone was in place, ready to go.

The goal was to get the draw done as quickly, safely and easily as possible for all.

It was a huge success! We learned a lot about what parents found valuable such as doing this on a Saturday when both parents were available to either both go to the appointment or split up so one can go to the blood draw and the other can be with the other children. Traffic and parking were also much easier on Saturday.

The end result is that after surveying parents who participated, we decided that we would create our own blood draw clinic here at SC Autism Center. With generous donations, we were able to purchase the equipment needed and space was remodeled to meet the specs required. We’re now ironing out some last details before being ready to launch it.

theautismblog: When do you anticipate the new blood draw clinic at SC Autism Center will begin?

JR: We are hoping for this Fall.

We’d like to thank Jason Russo for sharing his insights on the difficult challenge of doing a blood draw for children with autism. We look forward to an update once the new clinic is up and running. Also see our blogs on getting a haircut, going to the grocery store and visiting the dentist.

2 Comments on “Children with Autism and Blood Draws”