Autism and the Sibling’s Perspective

If you were to Google the definition of “sibling” this is what you would find, “One of two or more individuals having one or both parents in common; a brother or sister.” Seems pretty clear, a simple relationship, not very interesting. There’s nothing about frustration, laughter or botched trips to the grocery store. It doesn’t say anything about a friend or a partner in crime. The siblings we got to interview ranged in age from 8-25 and with that their answers. One thing they all had in common is their candid perspectives of what it’s like to have a sibling with an autism spectrum disorder (ASD) and the love they have for their siblings. This week we are going to share those interviews with you. 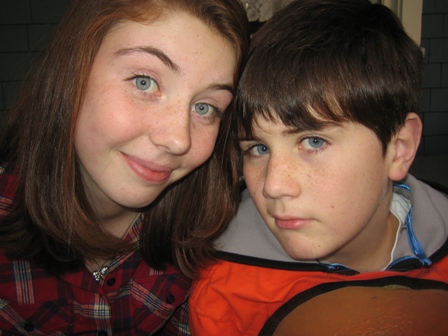 theautismblog: Your name and age:

theautismblog: Your brother’s name and age:

theautismblog: What kind of things do you do for fun?

Hang out with my friends, swim, soccer, rowing, and Facebook.

theautismblog: What kind of things does your brother do for fun?

theautismblog: Do you guys spend much time together? What do you do?

Yes, I take care of him when I come home from school sometimes. This summer, though, I haven’t seen him as much. He’s in therapy a lot or with his special caregiver. When we’re together, we jump on the trampoline and I chase him around the house. Sometimes we go roller-blading. I like to tickle him.

theautismblog: What have you taught your brother?

I’m not really sure what I’ve taught him. When he was younger, I taught him things on the computer, but now he’s pretty good at it. I used to teach him rollerblading, but now he can do that too. I’m trying to teach him how to tie his shoes, but it’s not really working.

theautismblog: What has your brother taught you?

Arthur’s taught me, well, this computer game he likes to play. He shows me how to exit out of it because the regular way doesn’t work. He’s really good at rollerblading, better than me now. He teaches me how to stop and listen. He taught me to not be mean to people who have special needs. If people make fun of him, it makes me feel bad. I think about how that would feel to me.

theautismblog: What kinds of things are hard to do with your brother?

It’s hard to communicate with Arthur. It’s also really hard going out in public sometimes. Like when he is sad or something is the matter, it’s hard to understand what he is feeling. When we are out in public, he might throw a tantrum or make noises and it gets very embarrassing. It’s embarrassing because he looks “typical”, so people just think he’s weird.

theautismblog: Can you think of a time you felt really proud of your brother?

I was really proud of him when he memorized all the libraries in the Seattle-area. Or even when he learned to rollerblade, I thought that was pretty cool.

theautismblog: Does your brother ever embarrass or frustrate you? If yes, how do you handle it?

When we were in Boston visiting my dad’s family, we couldn’t go down to the beach every day because he would scream and refuse to go. Sometimes, he holds us back from doing basic things. I have to do stuff that he wants to do all the time.

theautismblog: Is there anything your family hasn’t been able to do or it’s been harder because of your brother?

We can’t go on big family trips together. He’s really difficult on car rides or a plane, except for Boston, because he’s used to that. Changing his routine is challenging for him. And I’m sad that we can never go to the same school.

theautismblog: How is your day-to-day life affected?

We do what Arthur wants to do most of the time. I have to be really flexible. It’s frustrating that I can’t do the things I like sometimes or hang out with friends as much because his needs come first a lot.

theautismblog: Do you feel like you get enough attention from your parents?

Sometimes I feel like he gets what he wants because they’re scared he’ll scream. I pretty much feel like I get enough attention though. My parents try to do stuff for me when they can.

theautismblog: What kinds of things do you do for fun with your parents? Does your brother ever affect this?

Me and my mom sometimes go on trips to my grandma’s without Arthur.

theautismblog: Where do you go if you need space from your brother?

My mom’s house and my mom doesn’t take him. Or I go to my room.

theautismblog: Do you have any friends that also have a brother or sister with autism? If yes, how did you meet them?

Yes, I do. I went to this kindergarten for kids with special needs and it had typically developing people like me. I have one friend Tala whose brother is Tariq and he has autism. Tala and I are still good friends.

theautismblog: Have you been to Sibshops at Children’s? What did you think?

Yes, I went to Sibshops at Seattle Children’s Hospital. I have been a part of it since I was 7 years old. Before that I wasn’t sure how other kids who had brothers or sister with disabilities handled it. I learned that a lot of other kids have it harder than I do; some families have more than one child with a disability.

theautismblog: If you put yourself in your brother’s shoes, what do you think he would say about you as a sister?

He sometimes feels annoyed with me, but I think he sees me as a good friend. It’s hard to tell.

Part 5 in this series

Part 4 in this series

Part 3 in this series

Part 2 in this series